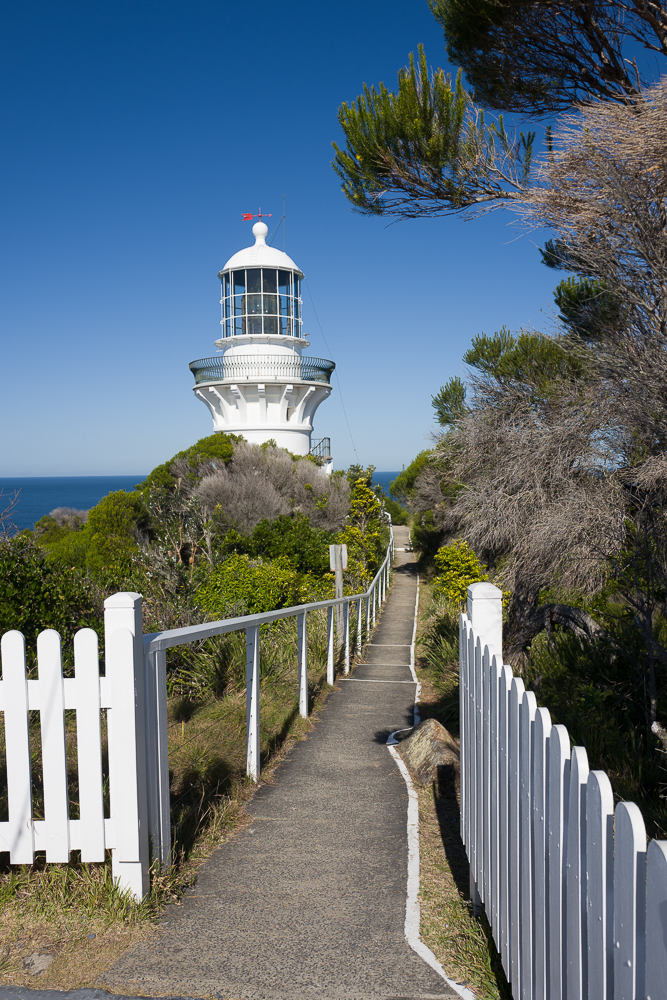 There are many very elegant lighthouses along the coast of Australia. One of my personal favourites is Sugarloaf Point Lighthouse guarding Seal Rocks south of Forster in NSW. The setting is stunning.
Let Wikipedia take up the narrative-
"The first recorded recommendation for building a lighthouse to guard Seal Rocks was made by a committee of the New South Wales Legislative Assembly in 1863. Original intentions were to place the lighthouse on the Rocks, but because of access difficulties the location finally chosen in 1873 was Sugarloaf Point. The lighthouse was designed by James Barnet, the NSW Colonial Architect of the time. Tenders were called in 1874. Construction required building a 460 m long jetty, which was used to land the 1,800 tonnes of supplies and materials required for the construction. Construction was completed in 1875 and the light was first lit on 1 December 1875".
Today the lighthouse is fully automated and the former lighthouse keepers cottages are tourist accommodation leased out by NSW National Parks and Wildlife Service. 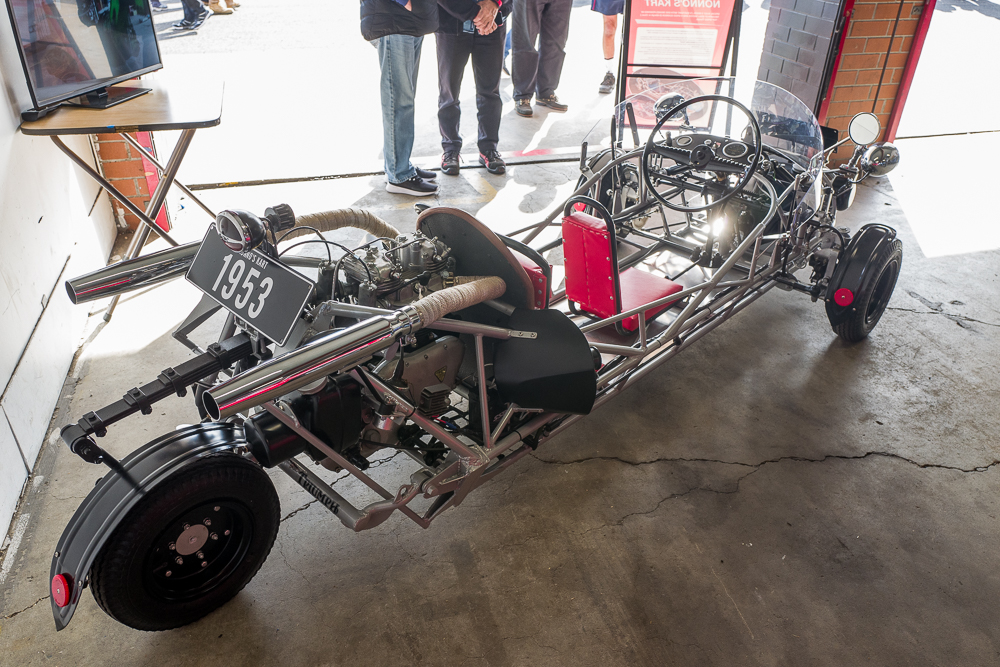 Seen at the recent Shannons Classic at SydneyMotorSportPark -this odd device-Nonno's kart.
An information board gave the background story. What a weird device and why spend so much restoring it? 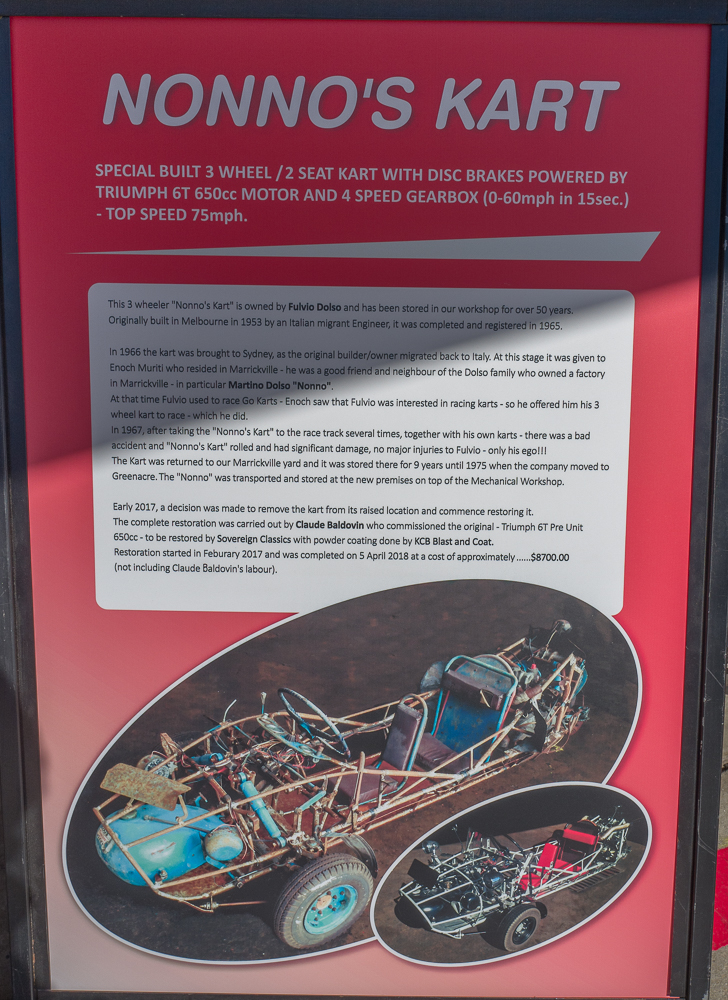 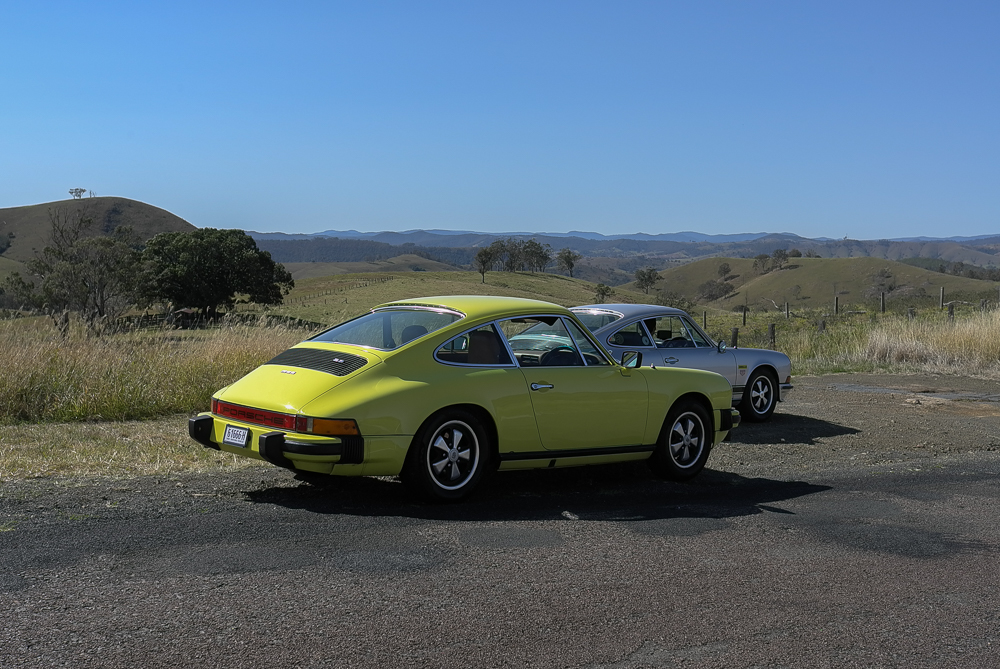 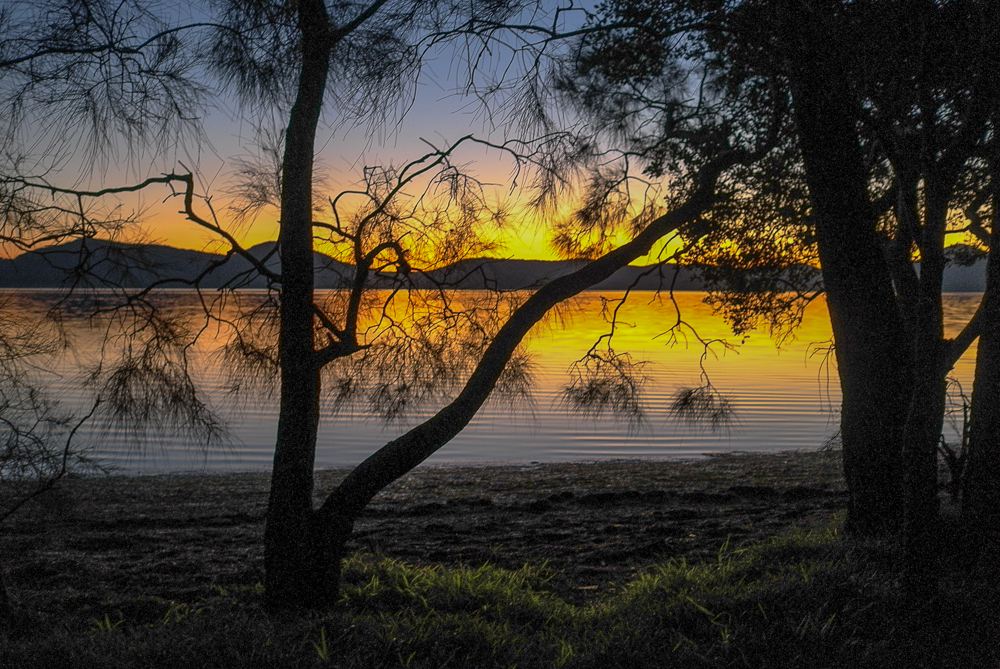 For over a year until the last few weeks I have not done much driving in either of my two Porsches apart from short local runs to coffee at Hardys Bay and down to the very occasional monthly meet at the Pie In the Sky at Cowan. Firstly I was in hospital, then I could not drive when I was recovering and then the summer was way too hot and finally the last few months we have been travelling.
But recently there has been a burst of Porsche driving activity aided by the weather.
Three weeks ago it was the long road trip in the 2.2 (silver car) described in the blog last month. Then last weekend it was down to the Shannons Classic at SydneyMotorSportPark in the 2.7 and then this week Craig and I did a rerun of the first part of our earlier road trip north of Beresfield and into the country around Dungog and down to Buladelah and then into the Myall Lakes National Park.
Again we were so lucky with the traffic-there was barely any. The weather was again unseasonally warm and clear although the lack of rain is really distressing the countryside. The scenery had not changed in three weeks and it was another great drive. This time I took my 1977 2.7 911-yellow car above. It is not quite as sharp in its handling as the go-kart like 1991 2.2 and the motor does not rev as freely as the shorter stroke light flywheel 2.2. Also the 2.7's CSI fuel injection is not as responsive as the gas guzzling Weber carburettors on the 2.2. I can really steer the 2.2 on the throttle and it is super responsive-the 2.7 not quite so but it is a matter of degree.
Out on this hilly country route the roads are very winding-great Porsche driving roads-and the posted speed limits are really about as high as you want to travel. I struggled to keep up with Craig on this trip-and a few times I found myself wishing that I had bought the 2.2 so that I could keep right on his tail through the really tight sections.
Both our cars ran faultlessly for the trip although mine seems to have a few electrical gremlins with the auxiliary driving lights not working and the electric radio aerial-which I have not used for probably 5 years-suddenly switching itself on and then not retracting. I'll have to see whether it can be sorted easily.
I manged to see the sun setting over Wallis Lake in the Myall Lakes National Park where I took the sunset shot and the glowing 911 shot above with the X1.

Photos taken at today's CMC Shannons Classic at SydneyMotorSportPark. With 1900 cars on display it was big event. Average age of attendees probably 65-possibly higher. Some wonderful cars but also many which have me scratching my head and asking -why? But each to his own.
The bikes are usually a highlight for me but there were hardly any this year.
As I drove down in my 2.7 911 (yellow nose just visible in Porsche line up) early in the morning I saw at least half a dozen cars obviously on the way to the event failing to proceed by the side of the road with their bonnets (hoods) up and not one was a British car. Honest. 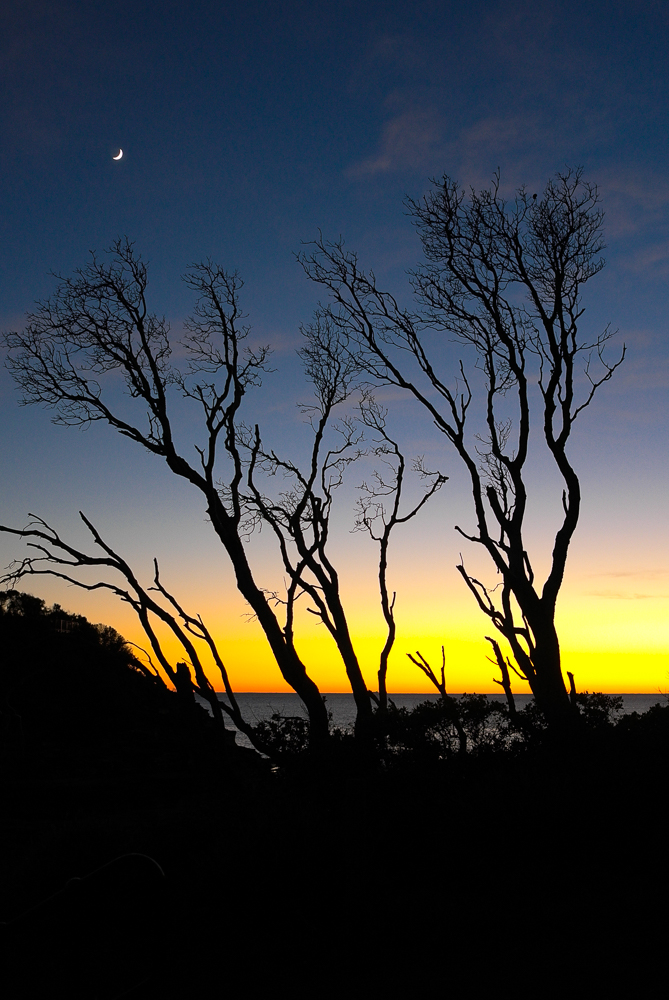 For the past three weeks we have had cloudless days and nights and spectacular sunrises. As we are not on summertime my early morning walks are in the dark for most of the time so I have not been taking a camera with me. Also I have been trying to up my exercise rate and taking a camera slows me down. However the last week the sunrises have been extraordinary-the best I have seen in living in Terrigal for ten years and on Tuesday morning I took the X1 and captured this shot at Terrigal Haven. That's a finest slither of moon on the left. This is from a jpeg straight out of the camera and I have not touched the saturaton or colour balance.
No comments: 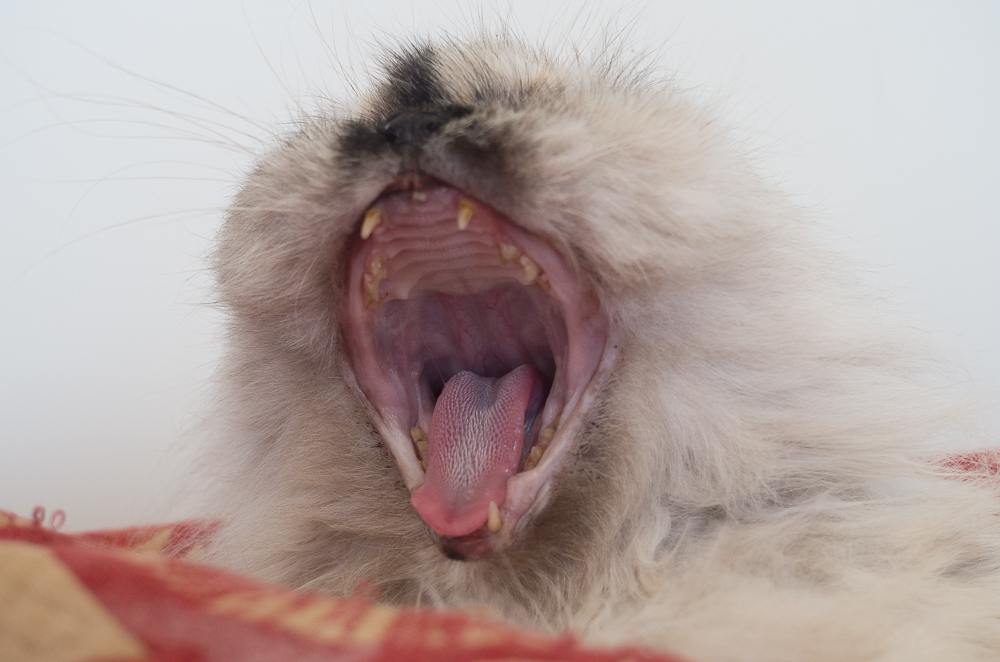 Nowadays, Phoebe, aged 18, is a very committed sleepy head during the day. At night  she prowls around and on a bad night seeks attention and meows loudly every hour or so. Not a good look but she is an old lady.
I was just photographing her sleepy head look when she decided to give this enormous yawn. Her teeth have a big build up of tartar but she is too old to submit her to a general anaesthetic. I have seen lions doing an identical yawn-it's a cat thing.
The sleepy head look photo is below.
I used the X Vario  for this shot as the electronic viewfinder swivels up 90% so you can look down into it which is useful for these closeups. 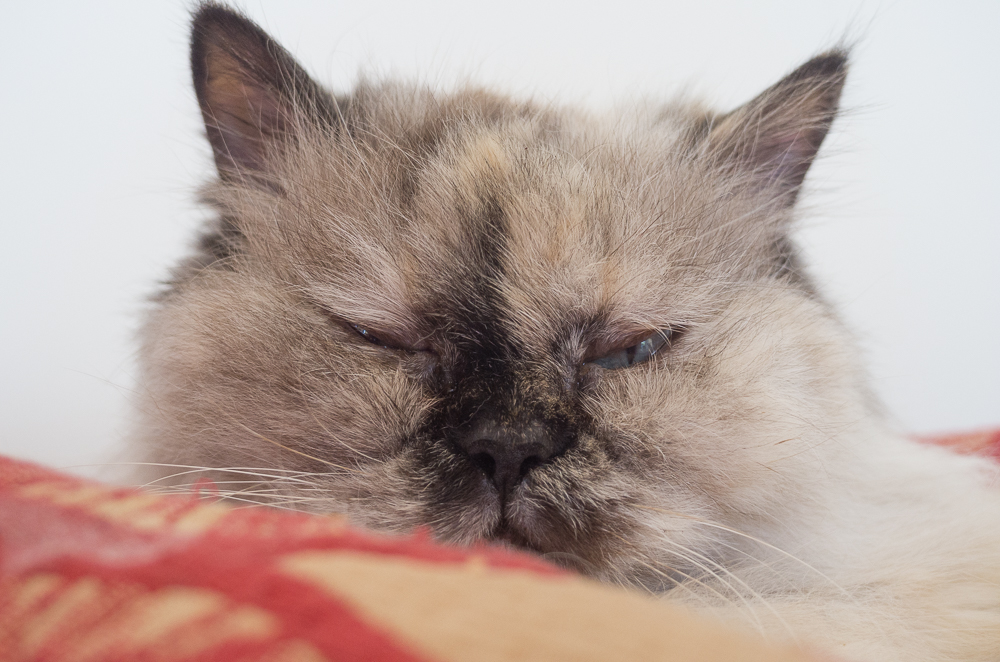