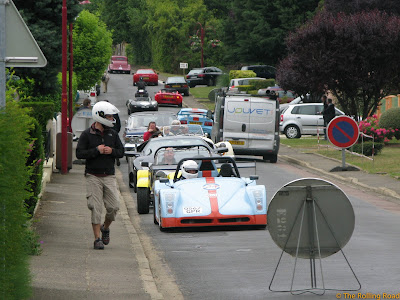 Why is this man wearing a crash helmet running beside this strange Kawasaki motorcycle engined sports car in a small French village ?
Because he's Mr Reverse . The car has a motorcycle gearbox with no reverse gear so to do a three point turn Mr Reverse has to get out and push the car backwards ! 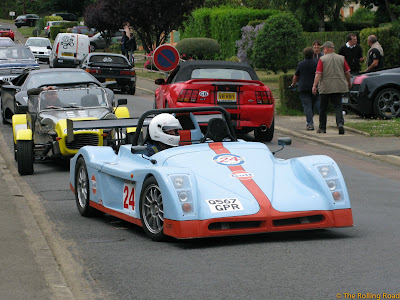 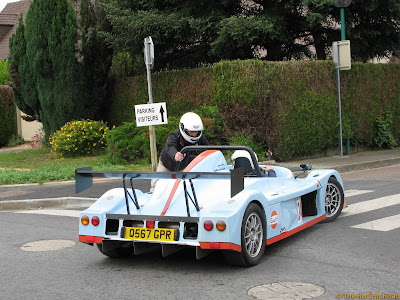 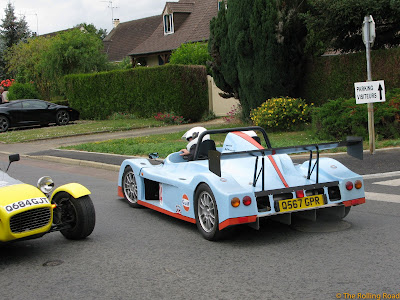 With a total lack of any form of weather protection - even a windscreen - yet alone safety equipment or luggage space as well as lacking reverse this is probably not the ideal vehicle to take your wife/girlfriend/mistress to the Le Mans 24 hours .And yes the car and this crew are English and both male.

TOO GOOD TO RUN 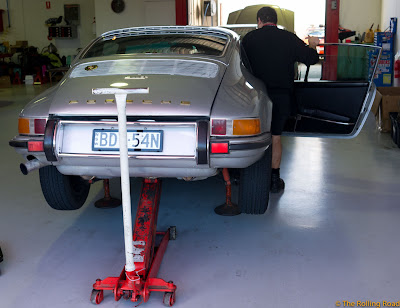 Took the 2.2 up to my local Porsche whisperer -- Simon at Autowerks in Charmhaven -- to have the clutch adjusted .             It's now better than it was but I see a bill for a new clutch in my near future .The car does get driven hard and the 901 gearbox is not the most user friendly of gearboxes which I suspect tends to increase clutch abuse- by me .
Whilst I was there I photographed this superb 2.3 mfi motor which Simon is building up. If it goes as well as it looks it will be a ripper .It really looks too good to put into a car and run-- although the nearly finished car which it is going in is equally spectacular .Nice job Simon- and Craig. 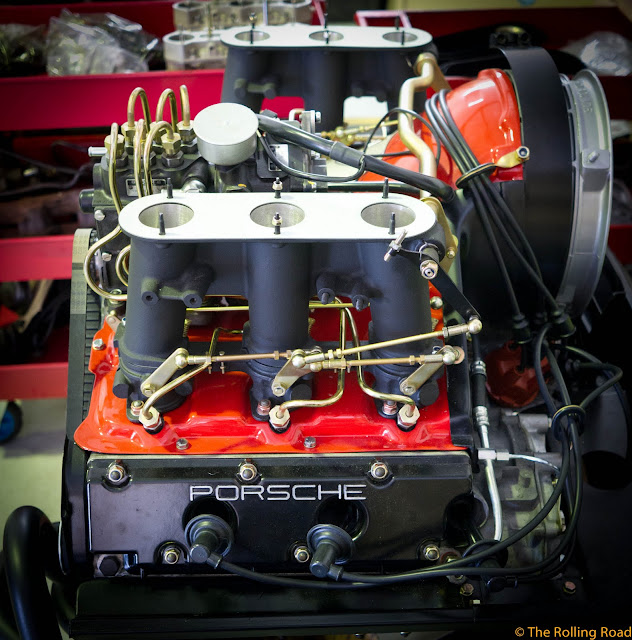 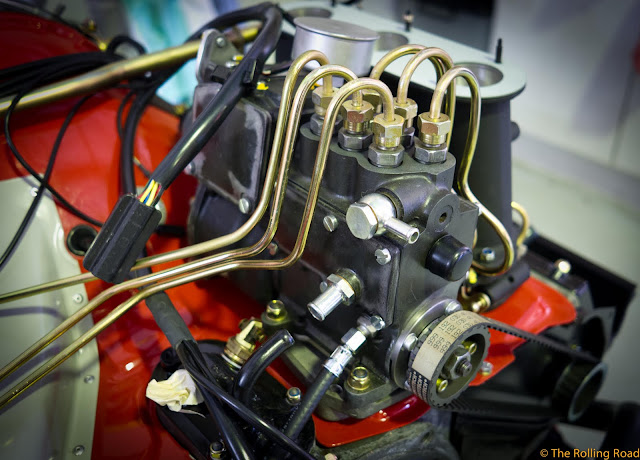 A stitched panorama of 5 images of the paddock at the 2011 Le Mans . In fact the photo only shows half the paddock . There is another area the same size beyond the massive Audi facility in the centre of the paddock . Imagine the complexities of moving all these motor homes and transporters into place and setting it all up . And the chaos as they all pull out after the race .
There is also a tyre paddock out of picture to the left which is as big as the main paddock . It is full of the tyre manufacturer's trucks and motorhomes . The support races also have their own paddocks on the outside of the track . The Le Mans 24 hours is a big gig .
1 comment: 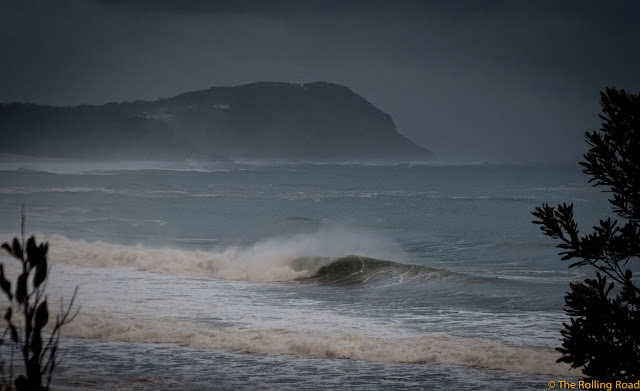 Absolutely foul weather for a week here . Wettest July since 1951 and there are still quite a few days to go . Before cabin fever becomes too serious I took a walk first thing with a camera this morning and captured what is pretty normal seascape this July.
No comments: 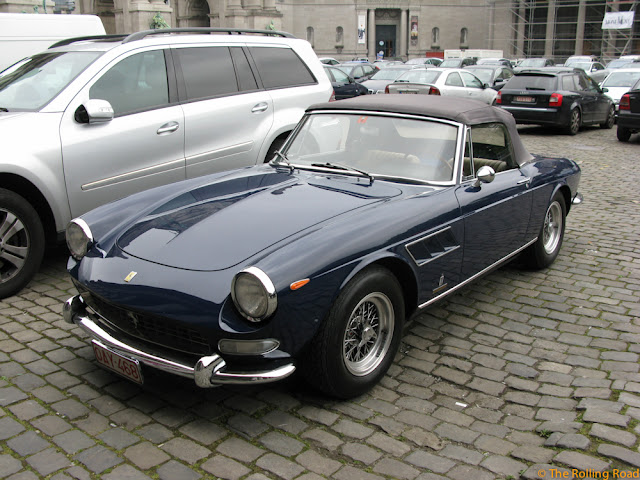 I am pretty careful where I park my Porsches when I leave them on the street . Sometimes I wonder if my caution is misplaced when I see valuable cars out and about . I saw this beautiful Ferrari just parked on the street in Brussels last month . And how about the rare as rocking horse droppings Porsche Carrera GT casually driving out of the camp site at this year's Le Mans ? Presumably his mates bought his tent in their Cayenne. 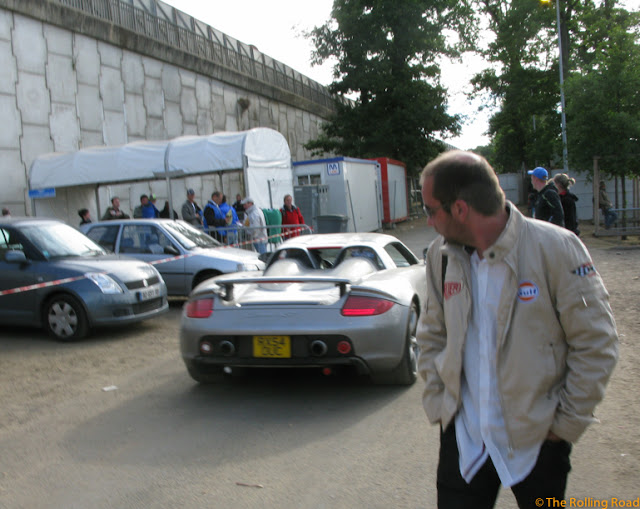 PORSCHES IN THE MIST


Driving the Wiseman's Ferry Road over Mangove Mountain down through the national park and then alongside the Hawkesbury from Somersby to Wiseman's Ferry quickly is challenging in the dry . Fast bends , slow bends , very slow bends, sheer drops , short straights , downhill sweepers , narrow road , multiple bridges - it's 64 kms of mountain roads made for old Porsches . Doing it in the wet quickly in an old Porsche is even more challenging as three of us found out on Sunday morning when we went down to join up a great turnout drivers of classic Porsches ( and one Boxster) for breakfast at Wiseman's Ferry .A great meet in a great location .
Images by myself and Rob Scheeren( HD Images).

I spotted this very tidy and apparently original Porsche 912 in the Autoworld motor museum in Brussels last month . It's sad to see a car like this stuck in a museum.It should be out being driven as Dr Porsche intended. 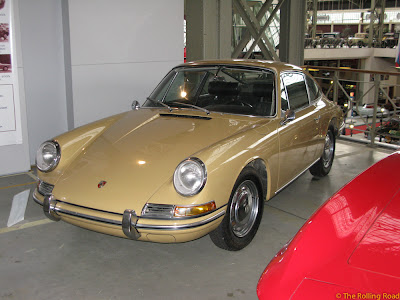 At the opposite end of the spectrum less than a week later I spotted this early 911 being used as a daily driver in Paris . It was regularly packed on the street near my hotel in Montparnasse .One morning I saw the owner who confirmed that he drove it "tous les jours ".With no real bumpers it would be very vulnerable -see earlier posts on Paris parking . 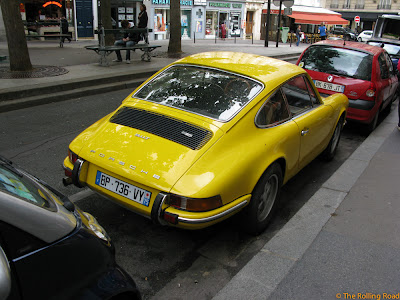 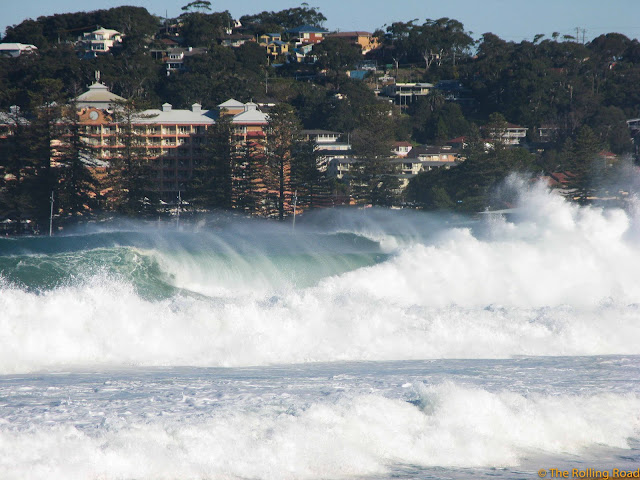 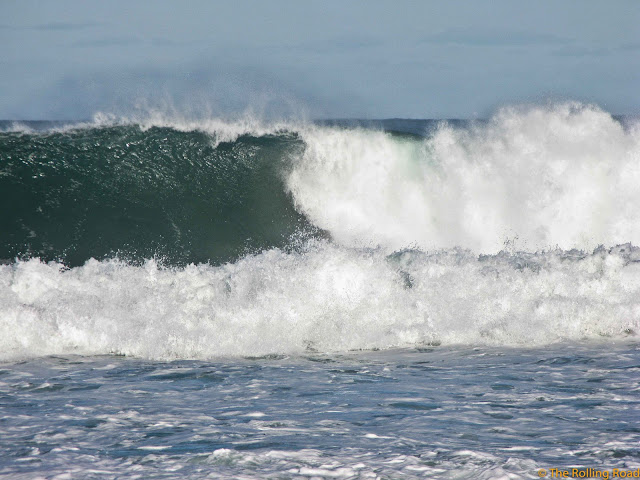 Very strong winds for the last few days have generated big surf conditions . Yesterday ( Sunday) at nearby Forresters Beach there were the biggest waves I have ever seen in Australia and it continued today although the waves were smaller . A small group of surfers braved the conditions but few caught the waves.
Photos taken with a Canon G9 and a teleconverter .
1 comment: 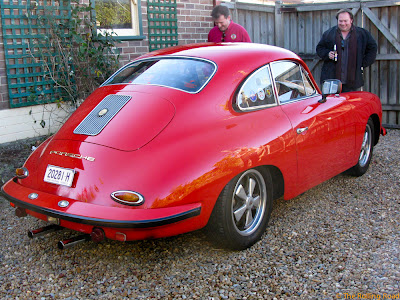 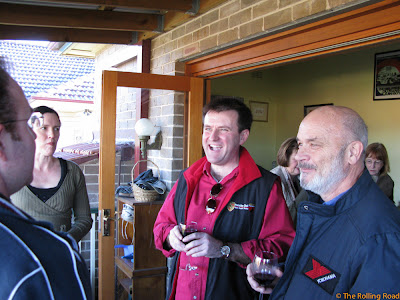 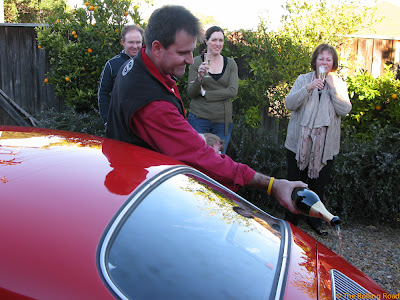 I went to western Sydney for a birthday party for a car yesterday afternooon -as you do .The car in question has been in the Reed family for 50 years . Purchased from the Australian importer back in 1961 by the late Brian Reed the 356 is still owned and cherished by the Reed family .
Justin Reed, a complete Porsche tragic , organised the gathering of fellow enthusiasts who toasted the car appropriately with German bubbles .
A few of the 356 tragics muttered about it being time to restore the car to its original condition (" those mirrors are awful Justin") but the Reeds want to keep it as Brian intended at least for now .
No comments: 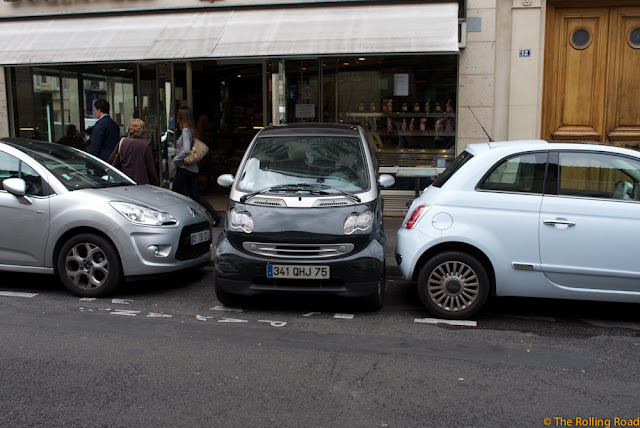 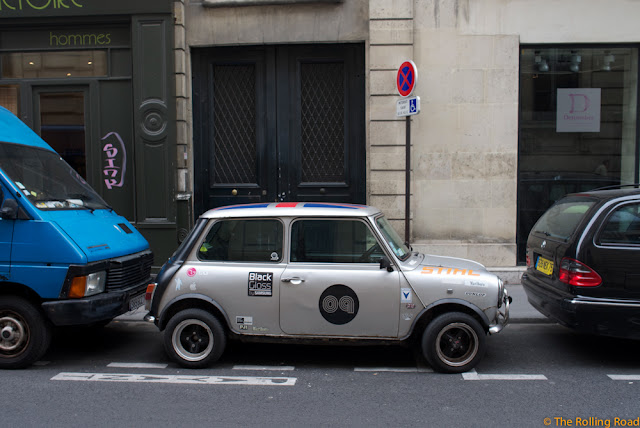 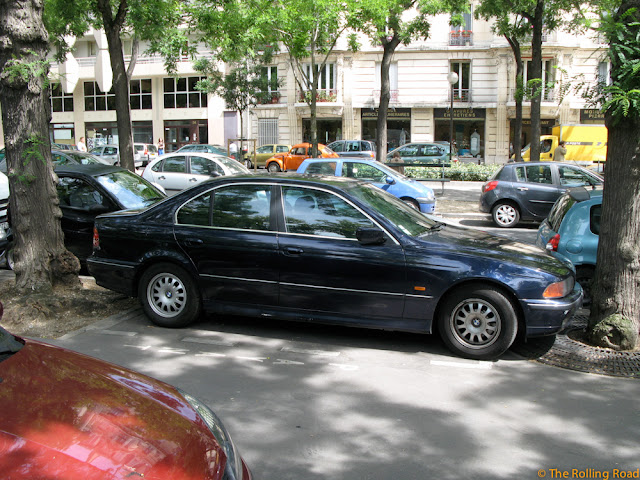 LE MANS -THEN AND NOW 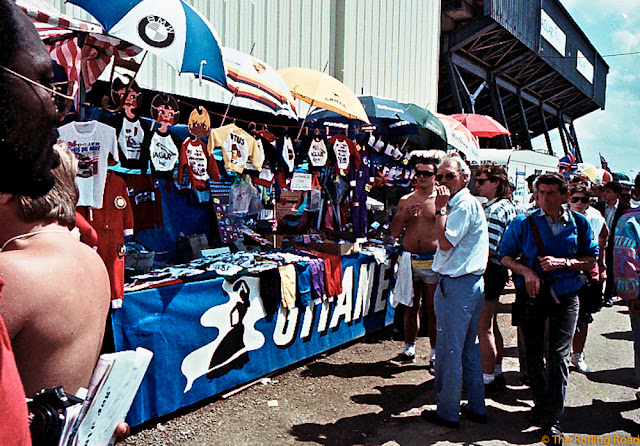 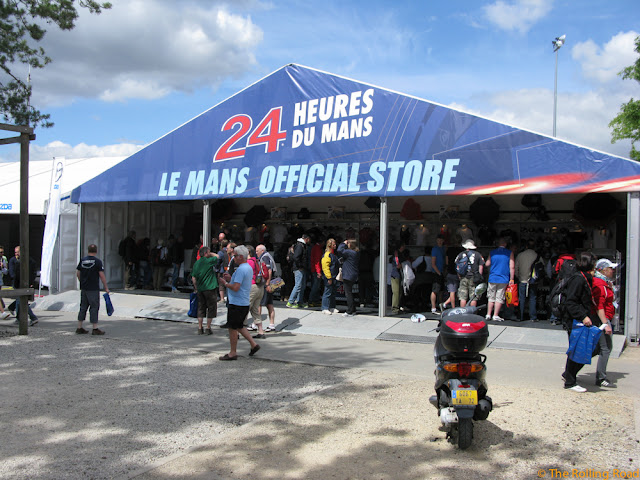 When you see the merchandise sales tents and trucks at Le Mans today with the official authorised, licensed and very expensive gear it's difficult to envisage that only 23 years ago it was open slather with very basic market stalls selling branded merchandise without even a nod in the direction of authorisation and licensing .And of course cigarette brands featured heavily back then.
Shot at the 1988 Le Mans behind the tribune on the main straight and at the 2011 Le Mans in the main retail and display area.
No comments:

I hope that the 2014 Porsche ( see previous post ) makes "racing car" noises. At this year's Le Mans there was demo of the Le Mans cars of tomorrow-- electric and silent . It wouldn't be motor racing if there was no noise . The diesel Peugeots and Audis racing this year make a quiet whistle but most of the field are still petrol engined cars making real noises so it is not an issue-yet .
I do wonder about hybrids and I am not the only one not convinced . Photo from Le Container http://lecontainer.blogspot.com/ 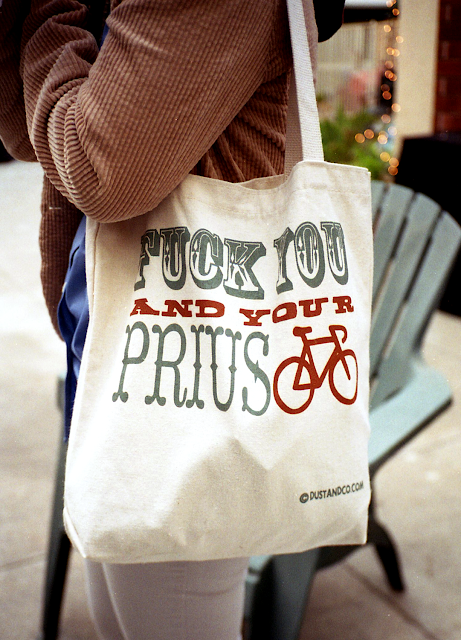 Porsche have announced that they are returning to Le Mans in 2014 with a works team with the objective of winning!


Here is the translation of the press release issued by Porsche.
Porsche back to Le Mans in 2014
The factory Porsche will return to Le Mans with an LM P1 prototype at Le Mans. The first participation in a race this new car is scheduled for 2014. Porsche with their 16 victories, are the most successful manufacturer at Le Mans, the last being the success of the 911 GT1 in 1998.
"Motor sport has always been an integral part of the Porsche marque, said Matthias Mueller, CEO of Porsche AG. For us it was a matter of time before making our return to the most important starting line in motor racing world. The success of Porsche at Le Mans remains unmatched. We want to add a 17th victory! "
With the RS Spyder prototype, Penske Racing competed the United States from 2006 to 2008 and then to 2010 by many other customer teams around the world and not without success, Porsche demonstrated the quality of their work in LM P2 . "With the RS Spyder, we proved that the engineers of our competition department in Weissach remained at the top level," says Wolfgang Hatz, head research and development of Porsche AG. "Using the DFI fuel injection for the first time in competition engines using high engine speeds has proven its effectiveness. Recently, with the 911 GT3 R Hybrid we again demonstrated the qualities of an entirely new propulsion technology, adapted to racing, while implementing a significant reduction in fuel consumption."
Head of Porsche Motorsport Hartmut Kristen is determined to meet the challenge of a complex research programme:"We look forward to meeting the challenge of developing new technologies and thus to build the future on the successes gained by the Porsche RS Spyder. Technologically, we kept at the forefront of basic research in sports-prototype. Now, we will begin a detailed assessment to identify different technological alternatives for our new car. This will obviously depend on the development of technical regulations in 2014. These regulations are attractive to us because the integration of hybrid technologies in the concept of a prototype racing is one of the options."
The first Porsche to win Le Mans 24 Hours was by Hans Herrmann and Richard Attwood in 1970 with the legendary 917. The 16th and most recent was the fact that Laurent Aiello, Stephane Ortelli and Allan McNish in 1998 with the 911 GT1.
1 comment: 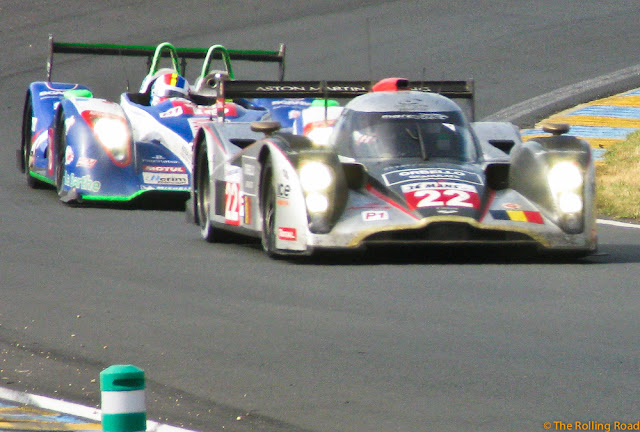 The Belgian Kronos Racing Lola Aston Martin # 22 finished 6th at this year's Le Mans -the second petrol engined car home and a great result for the team who only secured an entry for the race in early May .See http://therollingroad.blogspot.com/2011/05/feeling-rushed.html

One of the drivers was Vanina Ickx -- daughter of famous multi Le Mans winner Jacky Ickx seehttp://www.vaninaickx.com/  It must be in the genes.

A great result for a private team who really had to scramble to get onto the grid and who did their bit to save Aston's prestige after the AMR One debacle .