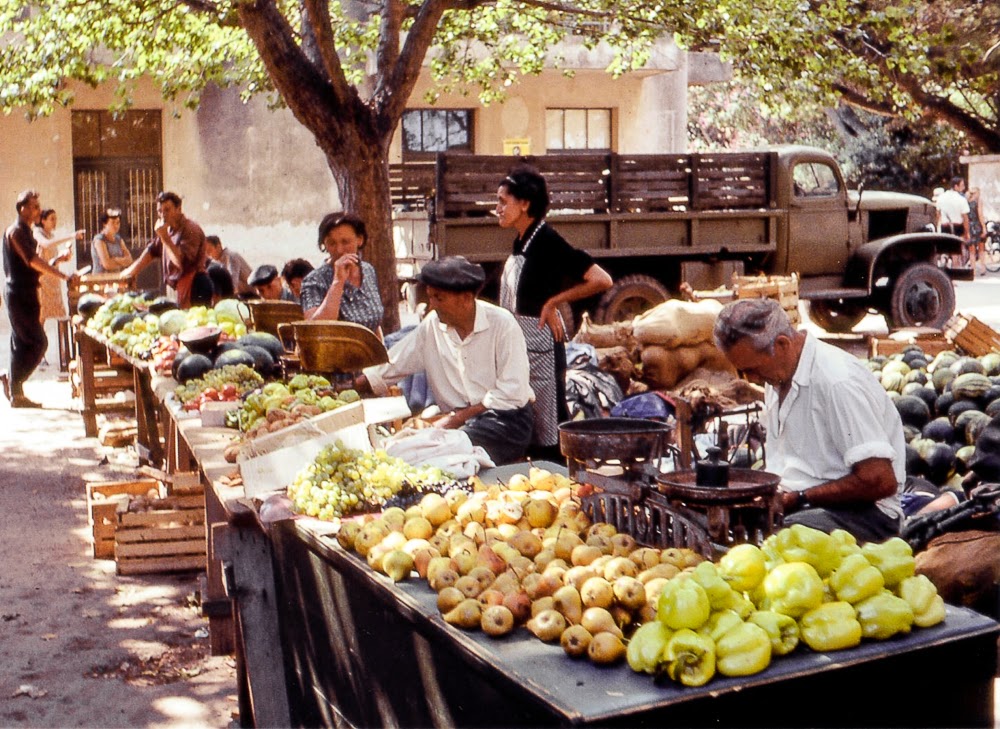 My brother,Bob,who lives in the UK sent me this wonderful photo taken by him way back in 1968 on the island of Korcula on the Adriatic Coast of what was then Yugoslavia and is today Croatia.What an evocative shot of a lost world.Yugoslavia has gone -fragmented after the appalling Balkans war which generated so much suffering and which NATO/UN/EU/US moved in to stop way too late.And the same thing is today happening in Syria.So much suffering by innocent people and so much posturing and impotence by the west and as usual so much obstructionism by Russian and now China.When will we ever learn?

The photo was taken on a half frame Olympus camera on Kodachrome film.Unfortunately my brother only had a print from the original slide to scan in and this was emailed to me so it has been through many steps and has lost both sharpness and its distinct Kodachrome look.Nonetheless it is a wonderful photo.Look at the market square with the shading trees and the people and that ancient (Russian?) truck.On the RH margin you can see a couple -- most likely English-with a bike.Almost certainly backpackers as the Adriatic Coast was the new frontier for backpackers at that time.I went there with my then girlfriend ( now spouse) in the year before in 1967.It was big trip by boat and train from the UK.No budget airlines or high speed trains then.And we camped so we carried it all in our backpacks.
A long haul across Europe to Munich and then down into Yugolavia.It was a gruelling journey across many borders with many passport checks.No EU.No Euro so assorted currencies to juggle and no calculators so mental arithmetic was the order of the day.No Google maps.No apps -silly or useful.No SMS messages home.No daily Facebook updates.Just a simple camera -no cords and chargers and spare batteries-and probably one roll of slide film.Just 36 or 72 pictures at most.You set out and perhaps you sent a postcard whilst you were there which if you were lucky got to your home before you did 8 weeks later.But it was a magic place when you got there.The British package deal hordes had not arrived although there were plenty of sunburnt German tourists with their caravans and their big tents -drinking beer for breakfast-as the German economic miracle was in full swing by then.The sea was crystal clear -- it had not been overfished -and it was always sunny and very hot and very cheap.
Was it a better time? I cannot say that but I know that it was a much simpler time.
Truly a lost world.